A Little Taste of Iran

Today as we ventured into the big city we went to a tiny Persian restaurant snuggled in between two small Korean restaurants.  We were hungry and ready to try something new.  None of us had really had Iranian food before, but we had spent some time this school year learning about the country and culture of Iran.  As a vegetarian my options were slim, but there was an interesting soup that I was going to try.  My husband ordered some chicken dish that was cooked with pomegranates and walnuts and he ordered chicken breast and rice for the kids.

Drinks could be chosen from a refrigerated display.  As I looked into the display I saw the standard soda choices, water, and a good selection of sugary fruity drinks.  I looked on the top and found something different.  Ah-ha.  Wanting something authentic, I chose the yogurt drink.  I assumed that it was going to taste like plain yogurt and I wasn’t mistaken.  I wanted all my kids to try it and asked who wanted to try it first.  My daughter quickly shouted that she wanted to go first.  I gave her a little sip and her face puckered up as she quickly spit into her napkin before trying to remove the taste completely from her tongue.  My boys tried it too.  No likes, but my oldest son was able to read the brand name in Arabic script on the bottle.  I`ll take that. 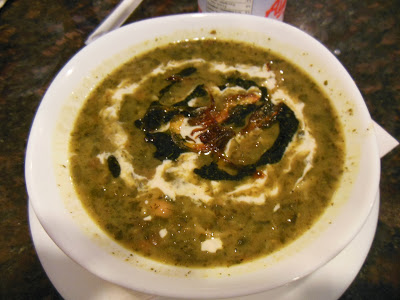 This soup was called Ash.  It contained a mixture of herbs, beans, and spices with whey sauce.  There were also a few noodles in the soup with some fried onions on top as a garnish.  I expected it to be spicy, but it wasn`t at all.  It was excellent.  I had my kids try it and even my picky eater liked it.  My 5 year old wasn`t crazy about it, but this was after she eagerly tried the yogurt drink.  I don`t think she was too eager to like much after that. 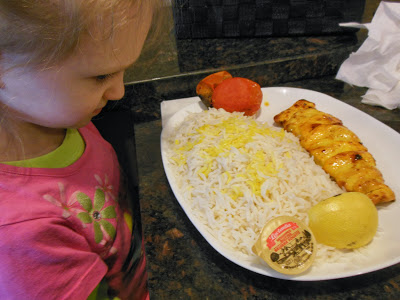 This is the chicken kebob dish that each of my children had.  There was a heaping pile of rice with chicken that cut very easily.  My daughter declared that the chicken and tomato were quite yummy. Of course, she did have a good helping of ketchup on her chicken.  She didn`t want her lemon slice, but did eat a bunch of the rice.  My boys enjoyed the meal as well.
After leaving we took a short stroll down the street and founds lots of tiny shops offering Korean food, Chinese food, Korean and Chinese food, bubble tea, as well as Asian dessert places.  I can`t forget to mention the Persian book store a few doors down too.
This visit wrapped up our study of Iran.  We have explored a country that is rich in culture and a land that is beautiful and varied.  During this school year we are studying several different countries of the Middle East as well as learning about the religions of Islam and Judaism.
This is our 7th year homeschooling and starting in our second year of homeschooling we began to learn about different countries in depth.  That means that we focus on one area of the globe during a school year and I typically pick 3 countries to learn about.  For the Middle East we are learning about Saudi Arabia, Israel, and Iran.  So far we have covered North America, the Arctic, Europe, and spent a couple years in Asia.  It is one of my children`s favorite parts of school and I must admit that it is one of mine as well.