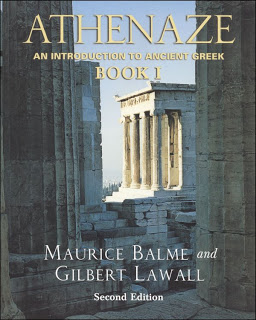 We have been using Hey Andrew, Teach Me Some Greek for several years now at a relaxed pace.  The first couple books slowly teach the different letters of the alphabet, the sounds they make, and some basic vocabulary.  The books are consumable and therefore costly when used for multiple children.  Each year for just the workbooks alone for two children it costs around $40.  Add to that cost anything you spend on the readers, the answer key or teacher’s edition, flashcards, tests, or the audio cd.  Considering that there were 8 books in the series I didn’t want to put that much investment into a program when I’ve read some negative reviews about the second half of the series.  This year I started out using a free curriculum on www.inthebeginning.org with my oldest son while my younger son continued with Hey Andrew.  It seemed to be a great step-by-step program, but it was a little difficult to navigate and it wasn’t a complete program.  So after a couple months I started looking for something else.  I think I found a winner.  Athenaze.

Athenaze is a thorough ancient Greek curriculum that comes in a series of two books.  At a high school pace you would finish one level a year, but we aren’t going at that pace.  It teaches Attic Greek instead of Koine Greek.  Apparently Attic Greek is more difficult to learn, but you will be able to read Koine Greek if you learn Attic Greek.  In contrast to Hey Andrew, Athenaze costs about $70 a level for everything, but there are only two books to get through before you are at a level that is relatively competent.  I would only need to purchase a workbook for each additional child since the textbook is nonconsumable.  Since Athenaze is a widely used textbook for learning Attic Greek there are many free online resources related to the book.

Athenaze takes a reading approach to foreign language instruction.  It starts you reading a story in Greek from the very first chapter.  Every chapter also has a portion of the New Testament to read in Greek.  It covers vocabulary to memorize as well as grammatical concepts.  The curriculum comes complete with a workbook, textbook, and a teacher’s manual.  All three can be purchased at Rainbow Resource Center.  My son and I have been enjoying Athenaze together and I think we will stick with it long-term.  Once my younger son finishes the third book in the Hey Andrew series I will switch him over as well.