Last week we captured a bunch of Rollie Pollies and placed them in a terrarium. Today we started our first experiment using Creepy Crawlies and the Scientific Method: More Than 100 Hands-On Science Experiments for Children

. I wanted to study bugs with my boys this year because neither of them like bugs. I wanted them to get an appreciation for the little critters. Because of sensory issues neither of them want to touch bugs or let them crawl on them. So this study of bugs is challenging for them. During the experiments they had to transport the bugs in and out of the containers with their hands. 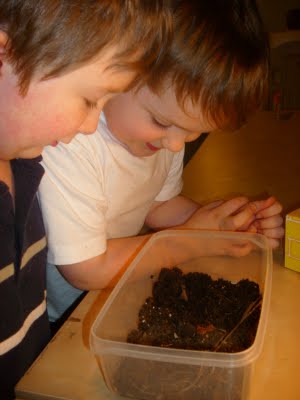 The first experiment we did involved placing a rollie pollie in a container of dirt that was damp on one side and dry on the other. The boys were to observe what the rollie pollie preferred. We did this with 3 different rollie pollies and determined that they prefer damp. 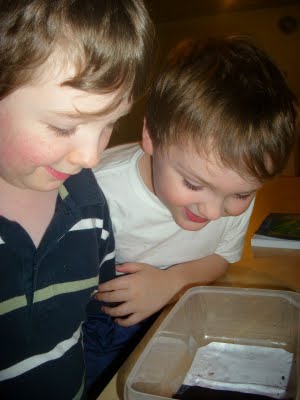 The second experiment we did was to place a rollie pollie in a container with the bottom covered with paper. Half was black construction paper and half was white paper. The paper was taped down so the bugs didn’t go under the paper. The boys were to observe whether the rollie pollie preferred light or dark. After testing 2 different rollie pollies it was determined that they prefer dark.

We will continue to do more experiments with these bugs for the next couple weeks.