Experiencing the 10 Plagues of Egypt 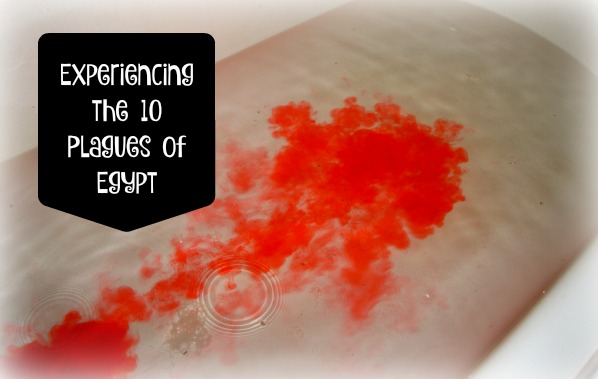 We are studying the ancient Hebrews in history right now and we just experienced the ten plagues of Egypt.  We came through unscathed, but the activities will hopefully help my children remember the plagues.  Someone had listed activities to do for each plague here.  I used some as written and adapted some to better suit us.  For each plague we read the passage in the Bible about the plague and then we began our activity. 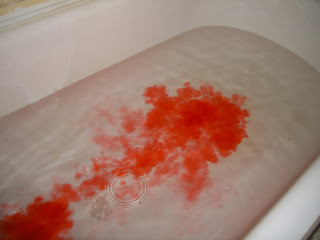 For this one we put a stopper in the tub and a couple sinks and I poured in water with red food coloring in it. 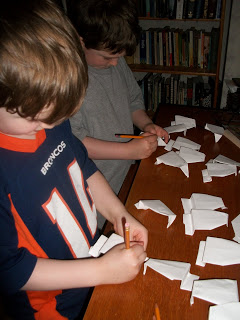 For this one we made simple origami frogs and scattered them around the house.  They are drawing eyes on each frog.

For this one they taped red hole-punched dots on their skin to demonstrate mosquito bites. 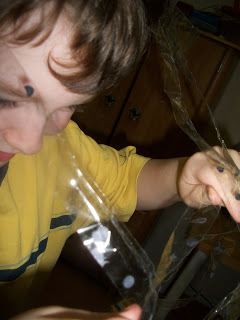 For this one we attempted to put black hole punches between two long strips of tape.  It was a little difficult.  They then ran through the long strips.  The strips were a little sticky so it stuck to them a little as they went through the swarm. 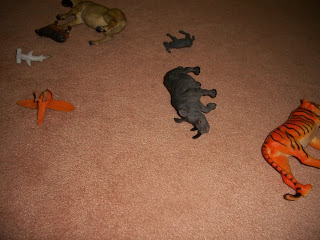 This one was rather simple.  We just took out toy animals and set up some in Egypt and some in Goshen.  The ones in Goshen remained standing while the ones in Egypt died.  These animals were not intended to be authentic for the biome, but this activity was more to help my children remember the plagues. 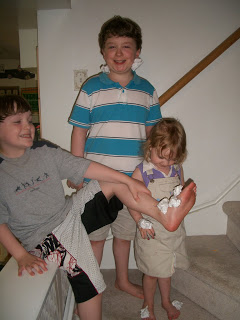 My poor kids all came down with boils at the same time.  For this one we just wadded up some white paper and taped it on.

This was a fun one.  I told them to watch out for hail and I went upstairs and started to throw down ice cubes.

This was a favorite.  I found a bunch of old cereal and dumped it on the floor.  They were to walk on them to help them think about what it must have been like to have the ground covered with locusts – crunch, crunch, crunch.  Then a great wind came and blew them all away (the vacuum). 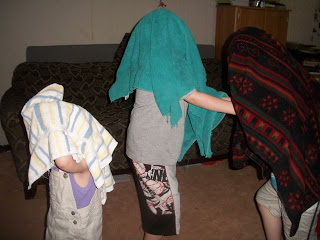 We tried turning out the lights, but it didn’t come close to being dark and putting something dark in front of all the windows would have been a major task so each child covered his/her head with something.  It worked well and bumping into each other promptly began.

10th Plague – Death of the firstborn and start of Passover

We talked about this one a little while and explained the significance of the blood on the doorpost and Passover.  We just cut strips of red construction paper and taped it around a door.

We followed this up with Cecil B. DeMille’s Ten Commandments movie.  It gave a little insight into the life and times of Moses.  Plus they were able to watch the Nile turn to blood and the Red Sea parted.