Home 1st grade Fighting World Poverty: Through the Eyes of a Child

Fighting World Poverty: Through the Eyes of a Child 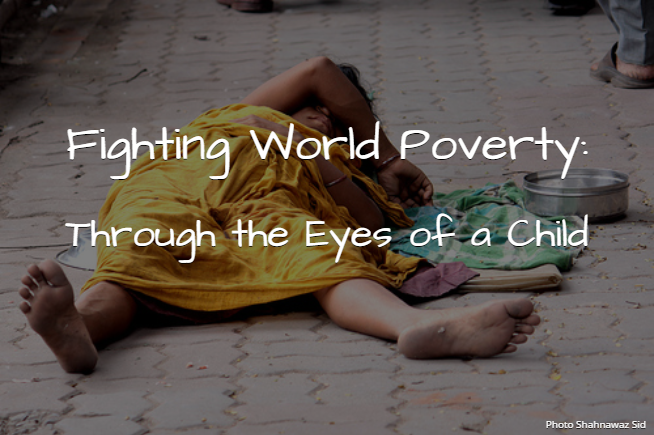 My 1st grader is going through a study on world poverty this year.  She came up with some ideas on how to help those who are poor.

I did a similar study with my boys when they were in 2nd grade and Kindergarten.  After my daughter finished her list, I read aloud the lists my boys made 5 years ago.

When my oldest was in second grade he said:

We can buy less stuff, recycle more, build water pumps when there is a drought, provide disaster relief, grow food in poor countries, bring materials to build infrastructure in some countries, and give people an education.  We can tell the people who own big companies to pay their workers more, stop making stuff made to break, and stop making us want more and more stuff with advertisements.

My Kindergartner’s list gave us all a laugh when we reread it (because he isn’t someone likely to ever sky dive).

After I read everyone’s aloud, I marveled aloud at the three different approaches and how all ideas are needed to tackle a problem like poverty.  Working together we can find solutions to help reduce poverty in our world.

I’ve received many comments and questions about the wisdom of doing a world poverty study with children who are younger.  This is my second go-around with this study now and it has had a positive influence on all of my kids.  Growing up in a materialistic culture has made it a necessary topic.  In our culture, kids are bombarded with gotta-have-it and need-more ideas from a very young age.  Watching some of the videos in our study have brought my children to tears.  Seeing the stark reality has helped motivate my children to action and changed their perspective.  They know that they are rich even though they don’t have the money to get what they want.  It has been 5 years since I did this study with my 5 and 7 year olds and now this topic is part of a continuing conversation that will likely never cease.