We started school yesterday.  We finished last school year in early August so we started this school year a little late.  This year I have a child in grade 4, grade 2, and a preschooler.  We started the day by opening presents.  Last school year we started this “tradition” instead of having a box day.  For box day we just opened the box to discover all the new supplies and books when they arrived in the mail.  Now I have my children wait until the first day of school.  I wrapped up some of the more exciting books or supplies for the school year and they have fun opening their presents.  I wrapped up things like incentive stickers, art supplies, games, CDs, and some books.

My oldest son was surprised with two dictionaries.  He loves words and was asking for a scientific Latin dictionary to look up the meaning of Latin words he encountered in science.  I purchased Dictionary Of Word Roots

for that purpose.  It isn’t a huge dictionary, but it will be especially helpful to him as we encounter many Latin names in our mammal study this school year.  He also received a Concise Oxford English Dictionary

.  We had been using a simple paperback dictionary purchased at Walmart.  Now that we are moving on to Word Within The Word and using Excavating English this school year it seems like it was time to invest in a bigger one.  He was quite happy since he thought he would have to wait another year for a better dictionary. 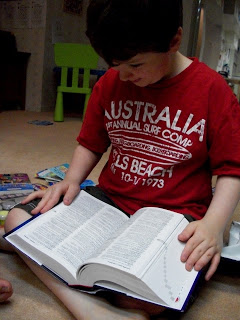 My younger son was surprised with a bunch of new paints.  I had been collecting odds and ends around the house for the past few months like an old ketchup bottle, wrapping paper tubes, an old yogurt container, and egg cartons.  He has stacking drawers filled with his art supplies so I filled up his bottom drawers with things I would normally send to recycling.  He was excited and quickly decided how he was going to use some of the items with his new paint.  His favorite item to open was their new chess set.  They have played many times already.  We are using ChessKids.com curriculum this school year to learn how to play. 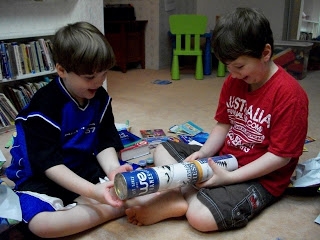 My little girl isn’t starting school yet, but she isn’t left out of the first day of school fun.  The plan is for her to be unschooled  throughout the preschool years.  She also received some new paints along with some glue, cute smelly pens, as well as a V-tech toy that shows her how to write letters.  She is starting to write letters on her own like her older brother did and he developed poor habits as a result.  I don’t want to start formal instruction on handwriting with her so I found the Vtech – Write And Learn Touch Tablet

to be a laid back way to reinforce correct formation of letters. 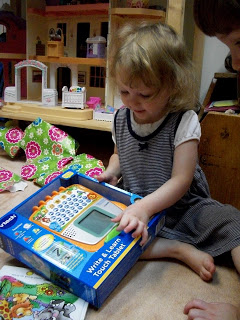 Following presents we had our annual pictures.  I get a picture of all my kids together.  It can be a challenge to get all three of them to be looking at the camera at the same time. 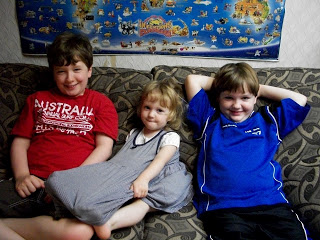 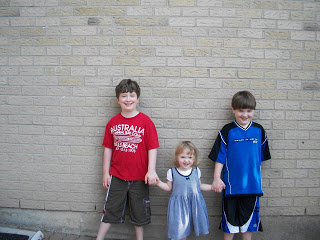 Right after lunch we prepared to go outside for some water fun.  We watched a few videos on the Songkran festival in Thailand first.  We are studying Thailand and Sri Lanka in school this year.  In case you aren’t aware the Songkran festival in Thailand is a great big water fight.  I had prepared a bunch of water balloons the night before so we all attempted to get each other soaked with water balloons.  Fortunately, I was able to escape too much wetness from the water balloon fight, but we moved on to the hose after the water balloons were gone.  I was more than drenched in a short amount of time.  The weather has been cool and I was hoping to get to have some Songkran fun before it was too late in the season.  The day was barely warm enough and the water was COLD.   But it was fun and something I won’t forget anyway.

The school year awaits.  I’m looking forward to it and I think my kids are as well.