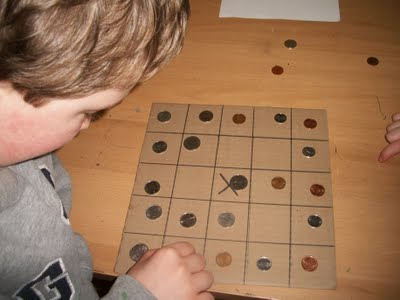 My boys played two games.  In the first game the pennies were diatoms, the nickels were copepods, dimes were herring, and quarters were orcas.  One child had the copepod and orca pieces and the other child had the diatoms and herring pieces.  Each child had to jump over a piece corresponding to the creature it was supposed to eat.  So the orca (quarters) had to jump over the herring (dimes) in order to remove a herring from the board.

For the second round of the game we added a human element so some orcas could be taken off the board.  We used a loonie ($1 Canadian coin) to represent a human and only allowed one in the game.  The child with the diatoms and herring had the loonie.

They probably spent a good 45 minutes to an hour playing those two games.  I had to emphasize that this game wouldn’t produce a winner because the child who had the coins for the top of the food chain would end up with the most pieces left on the board at the end of the game.  Still it was a fun process of trying to keep away from a predator while seeking to eat the food you were supposed to eat.