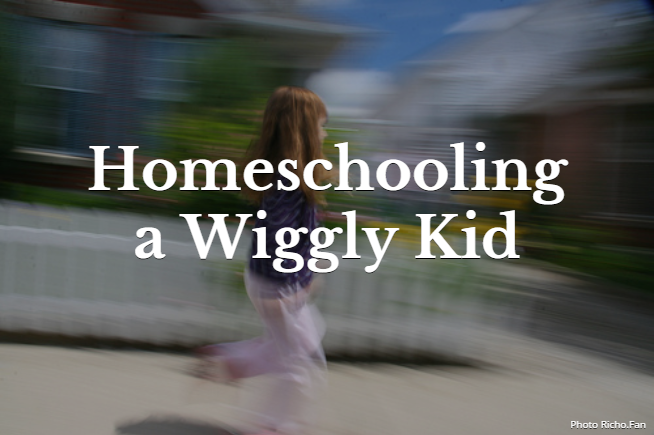 My son can be wiggly.  He can take a math workbook page and fill it up by putting drawings into every empty space.  He can make his hands into crashing cars or grab something close by and pretend it is a pirate cannon instead of completing the task given to him.  His imagination is alive and well.

How do I educate a mind that is quick to wander?  How do I help him learn when his imagination is so much more exciting than the task at hand?  Truth be told, I’m still learning.

This isn’t a problem unique to my son or to this time in history.  It is a common issue that is confronted by teachers and parents around the globe.

Here are a few things that I’ve found helpful:

My son is now 11 years old.  I wrote this post just before he turned 8 when he was in second grade and full of wiggles.  Now he is in 5th grade and the difference is amazing!  While still chock full of imagination, he can focus for long periods of time.  The wiggles are pretty much gone and I was just commenting to my husband the other day how he can work super fast when he focuses.

From the list above I think number 7 was the most important.  He had no trouble focusing when the task was engaging.  Having a chunk of his school day spent in engaging activities normalized staying on task.

Focus isn’t an issue anymore.  Yes, there are times when his mind wanders, but I think some mind wandering should be expected.

Wiggles aren’t an issue anymore either.  They have pretty much disappeared.

While I do believe some of the strategies that I’ve listed have helped, maturity is probably the thing that made the biggest difference.

So hold tight homeschoolers with wiggly kids.  Big time change may just be a few years ahead.