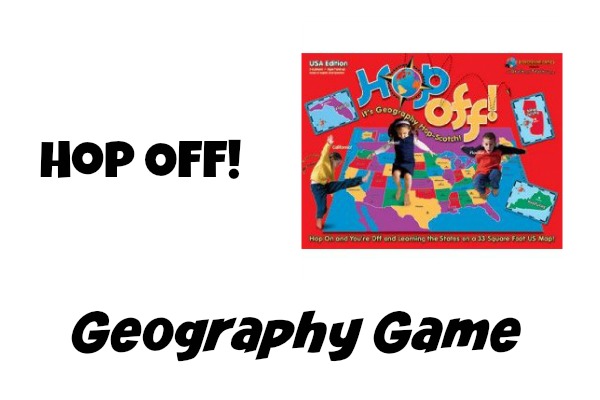 is a geography hopscotch game that we acquired last school year when we did a unit study on the United States. Hop Off!

comes with a huge colorful vinyl map of the USA, a set of cards with the names of pictures of the states, and a beanbag. The instructions for the game are more for a classroom setting, but we made up our our fun rules which I think are more fun than the original. There are so many different games you can make up too. The ones we like the most are the Baby Monster Game and the Call the Baby Game. Whenever I spread this mat out my young daughter would get excited and want to be involved too so we invented a way to play with her. 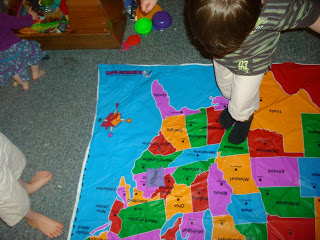 For the Baby Monster Game my son draws a card and locates the state on the map of the USA. He then stands at the bottom of Texas and must toss the beanbag to land on that state. If he misses then his turn is over and he draws a new card at his next turn. He he does hit the state then he has to hop on one foot, pick up the beanbag, and hop back. If my daughter (the baby monster) grabs the beanbag before he hops there and picks it up then his turn is over. My daughter is highly motivated to get to that bean bag first. My boys alternate turns until someone gets a predetermined number of points. The unexpected baby factor makes this game more interesting. We have played this way when my daughter was a crawler and when my daughter was a walker and it has been enjoyable both times.

The other version we do is Call the Baby. For Call the Baby both boys draw a card and locate their state on the map. Once they locate their state they position themselves nearby their state and try to coax their little sister to step or crawl on their state. The baby determines the person who gets the points here. We play until we reach a predetermined number of points – usually 5 or 10. Sometimes I have allowed them to have a toy or something in their hands trying to persuade the baby to walk their way and other times they have had to do it with nothing. Both ways have been fun. 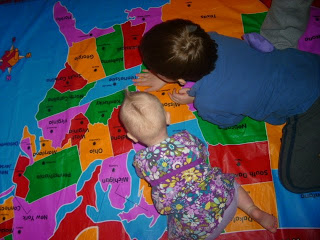 Anyway you play it you can’t help learning the states using Hop Off!