Home math Math on the Chalkboard

Math on the Chalkboard

My second grader is using Mathematical Reasoning Level C from the Critical Thinking Company. My son hates math drill and the curriculum from the Critical Thinking Company minimizes drill. Most math work is done through word problems involving real life situations. When math drill is addressed it is typically accompanied with a dot to dot that can be completed when the drill is done. Still, math drill is not welcomed. Earlier this week we changed things up a bit and my son did his math on the chalkboard. 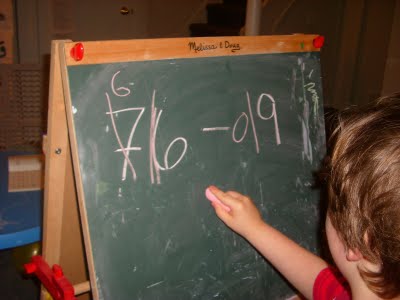 The chalkboard math made his drill more fun. He just took the problems in his math book and worked them out on the board and then wrote the answer in his math book. This method involved extra steps on his part, but he actually completed his math much quicker this way. I think we will be doing this again.