Phonics: A Tale of Two Learners 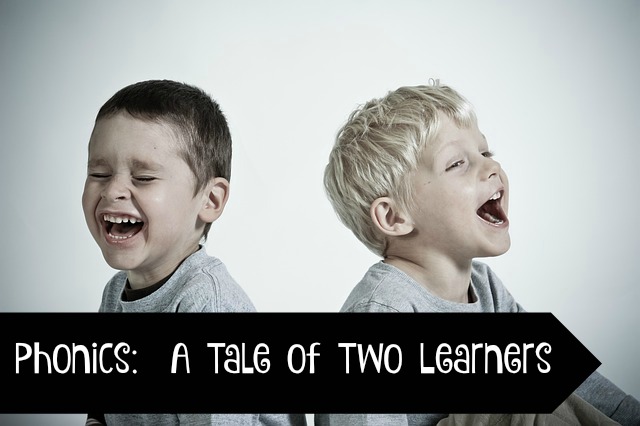 Once upon a time my oldest child was in Kindergarten.  He did not like phonics.  His reading skills had blossomed, but phonics was difficult for him.  One day I found a little message written inside his Explode the Code Book 3 workbook:  “I DOT LUK FONIX”  Translated, it means “I don’t like phonics”.

Two years later my second child was in Kindergarten.  He enjoyed phonics at that point.  His reading skills had also blossomed, yet he found phonics difficult.  Looking in my oldest child’s old workbook, I wondered how my second child would write the sentence “I don’t like phonics.” After I dictated that little sentence, I looked at what he wrote and he wrote the exact same thing that my oldest child did two years earlier: “I DOT LUK FONIX.”

When my oldest child was done was Explode the Code Book 3, I dropped phonics in favor of spelling.  By grade 4, I dropped spelling all together because this child turned out to be a natural speller.

When my second child was done with Explode the Code Book 3, we continued with another phonics program alongside a spelling program for a year before just going to spelling.  This child is continuing with spelling instruction through middle school.

I found it extremely interesting that my two kids had similar skill levels, used similar materials, finished Explode the Code 3 around the same age, and ended up in very different places a few years later.  Why the difference?  They are two completely different kids with their own unique strengths and learning styles.

Did you find that your kids showed similar skills at one point, but diverged later?