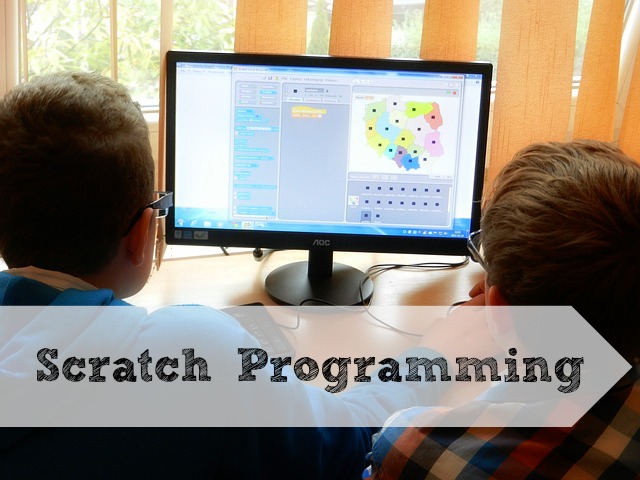 My son loves computers and has dreams of being a game designer one day.  Over the years has has enjoyed quite a bit of time on Scratch.  Scratch is a “tile-based visual programming environment” where kids can create animations, games, and stories.

Sometimes he spends his free time working on projects, but I’ve also used it as a tool for my son to do some projects for history or science.

Back when he was 9, he spent lots of time creating projects.  I think there were over 100 projects created that year! I can’t remember when he started on Scratch, but I think he started on there around age 7.

Here are a couple of projects that he did for history or science:

Here is another one he did for ancient Rome. I think this one was done after he watched Spartacus

Here is another one that he did on energy. It requires you to push the space bar to continue through his presentation. It had me laughing at where the energy ended up at the end of his project.

Because he is highly interested in making games, Scratch is a great tool for him to enjoy some project-based learning.  Fast forward to this past year.  At age 11, he isn’t using Scratch for school projects much now, but he is using some free time to create some games.  For school he is enjoying Blender, Piskel, blogging, and is taking a class to learn how to code with HTML and Javascript.
Here are a few Scratch projects from the past few months.

When my daughter was five years old, she started playing around on Scratch. She had been drawing on there awhile and this is one of her first projects that she shared. She drew the background and added the figures.

Now she is 7 and is getting a little help from her older brother as she learns more about Scratch. This is a recent project.