Sibling Conflicts: Working it out 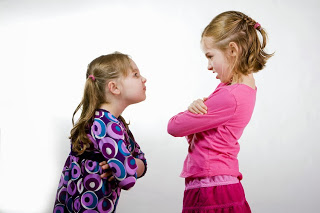 It is a given.  If there is more than one child in a house, there will be conflict.  As a parent, I have to decide what to do about it.  I’ve taken the position to deliberately step aside and let my children solve their own problems.  I occasionally offer advice and pointers about a more effective way to communicate, but mostly I stay out of it.

I believe that allowing them to work out their problems gives them essential skills for the future.  In everyday adult life they will have to work through differences and be able to compromise.  They need to learn how to give up some ground so that both parties are happy.  It isn’t an easy skill for many children to develop, but I believe it is one that requires a lot of practice.

During the working it out time I have a few ground rules.  Things like hitting, pushing, or other physical actions towards another person are off limits.  Also, yelling is not allowed.  I typically am in another room or on the sidelines listening to my kids attempt to reach a solution.  I wait for that moment of peace when both parties come to an agreement and walk away happy.

I do sometimes offer advice about how to communicate.  This typically happens when one child comes to me explaining how the other person is being unreasonable.  When this happens I like to point out a more effective way to communicate.  For instance, the child who comes to me might have been angrily saying things like “You always….” or “You never…”  I ask my child how that approach has been working and then suggest a new approach where the child talks calmly and states something like “I feel sad when …”  Usually having them change their you statements to I statements makes a big difference.

We had a couple of working it out situations that happened today.  Things aren’t always worked out instantly.  This morning I sat on the couch waiting for two of my kids to come to an agreement so we could start school.  It took them 15 minutes (13 to be exact) to come to an agreement where both parties were happy.  In case you were wondering, they didn’t miss 13 minutes of school.  It just took up some of their free time.  Later today we had another instance.  This time after a few minutes of arguments that were going no where, I intervened and suggested that each party calmly state what was wanted.  It turns out that they both wanted the same thing and they figured out a solution in less than a minute.

Working it out is something that can start young.  My youngest child comes to me for a bit more input when she is frustrated during the working it out process, but she is learning important skills in the process of resolving her problems.  As my kids get more mature, I notice that they are more able to understand the other person’s point of view and look for a solution that is win-win.

When I have attempted to step in and bring about a solution that seems best, my kids don’t ever arrive at that moment of peace where both parties are happy.  I’ve found that stepping back and allowing them to figure it out has helped them learn how to better deal with conflict.  I’m hoping that by the time they reach adulthood, compromise and achieving a win-win situation will be their normal response to conflict.