The Gift of Struggle

Every child deserves an equal opportunity to struggle. – Mary Slade 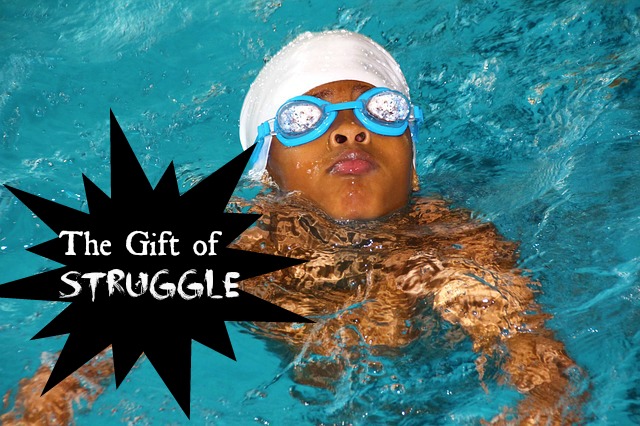 The word struggle is not often associated with a gift.  Gifts are supposed to be pleasant, right?  Struggle is not known for its pleasantness.  It can even be downright painful at times.

You often find this struggle portrayed in movies – especially sports related movies.  It is part of sports culture to push yourself and work through something difficult to achieve a goal.  I think it should be part of academics as well.  Each child should at some point learn how to work though something difficult and come through the other side.

Some children who are naturally good at academics may not encounter this intellectual struggle until they hit college.  Because they never learned to work through something difficult, some give up and take an easier path.  Others have to figure out how to deal with falling flat on their faces.

In designing my children’s education, I want each of my children to learn how to work through something intellectually difficult.  One way I have chosen to do just that is by using the Art of Problem Solving curriculum designed by Richard Rusczyk.  It is known for posing challenging math problems and requiring the student to think through things.  Richard Rusczyk said:

“We ask hard questions because so many of the problems worth solving in life are hard. If they were easy, someone else would have solved them before you got to them. This is why college classes at top-tier universities have tests on which nearly no one clears 70%, much less gets a perfect score. They’re training future researchers, and the whole point of research is to find and answer questions that have never been solved. You can’t learn how to do that without fighting with problems you can’t solve. If you are consistently getting every problem in a class correct, you shouldn’t be too happy — it means you aren’t learning efficiently enough. You need to find a harder class.”

I’ve been working on this concept with one of my kids recently.  It has been a struggle for him to struggle.  He finds it quite comfortable to do easier problems that contain no struggle.  He needed to learn how to face problems that were difficult.  He needed to become comfortable with not knowing and be okay with the struggle required to figure some things out.  It hasn’t been an easy journey for him or for me as his parent.  This journey is necessary for him.  The struggle hasn’t been pretty.  It was rough at times, most times.  One of the most beautiful things I’ve seen lately is my son’s smile after he had worked through something difficult and arrived at the other side of the struggle successful.  I think we have made it over the hump now.  It isn’t all smooth sailing, but he is becoming more and more okay with struggle.

My son tends to be strong in academics.  I seek to engage and challenge him in every subject, but there are only a couple areas that I’ve focused on real intellectual struggle.  One area is Greek.  I stepped up the pace in Greek a bit this past year and as we sink deeper into the grammar it gets pretty challenging.  The other area is mathematics.  Math isn’t a great love and it isn’t his major area of strength.  The Art of Problem Solving curriculum has really driven home the concept of struggle.  Many of the problems in the book require struggle to figure them out.  Sometimes it takes 30-45 minutes to solve just one problem.  At first I had him going through this book on his own, but joined in with him as an encourager and helped talk him through some problems (Socratic-style).  And yes, sometimes (many times) I didn’t know how to figure out the problems either.  It gave me a way to model how to positively attack something that was difficult.

One day I watched the movie Gifted Hands about Ben Carson who grew up disadvantaged and poor.  The movie portrayed how he thought himself stupid and how he worked hard to become the top of his class.  He went on to become a famous neurosurgeon.  But this isn’t the end of the story.  This movie portrayed him struggling as a neurosurgeon, trying to figure out ways to help his patients.  When I saw this I had a little lightbulb moment.  I had to show this movie to my kids!

This movie really helped my son and it was probably very influential in our recent progress.  My son saw struggle and the rewards that came with it.  He saw the adult Ben Carson struggle to figure things out.  In short, the movie helped normalize struggling.  It has helped him see that intellectual struggle is not a bad thing or something you go through because you aren’t smart enough to figure it out.  It helped him see that even a top student who went on to be a neurosurgeon dealt with struggle and continued to face intellectual struggles.  I’m in the process of lining up more movies that will demonstrate perseverance and grit.  I’m taking suggestions.  Please leave a note in the comment section if you can recommend one.

Learning to handle struggle and working through something difficult is an important life skill.  Some children naturally learn to handle struggle, but others need to practice and accept that it is okay to struggle.  Inventions, new ideas, and great books were the result of struggle.  Being able to work though something difficult is a gift that I desire to give to all my children.