Home arabic Thoughts on Foreign Language With a Visual-Spatial Learner

Thoughts on Foreign Language With a Visual-Spatial Learner 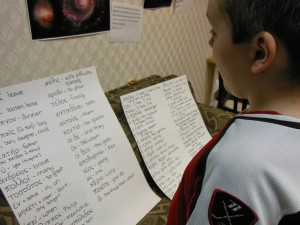 My son recently said something to me that had me thinking. We have been studying several foreign languages in our homeschool for 4-5 years now. The other day my visual-spatial learner made a comment that he knows Greek best. He has devoted time and effort into studying Arabic, Mandarin, and Greek, but Greek has been the one that we have spent the least amount of time studying.

So I began to wonder what it was about Greek that made it easier for him to pick up.  After I thought for awhile I realized that it wasn’t the language, but the approach the curriculum takes to learn the language. The curriculum that I am learning to help my son learn Greek is more of a whole to part method of learning.  I mentally compared and contrasted his curriculum with the other foreign language resources we are using to help me figure out why it works better for my son.

We have been using Athenaze as a Greek textbook for the past couple years.  Prior to that he used Hey Andrew, but showed little progress.  Athenaze has been difficult at times, but difficult exercises seem to help him connect with the material better. His textbook also gets the student reading and translating Greek stories right away.  Grammar is first discovered through the story before he learns and breaks apart Greek sentences into their grammatical parts.  I’ve noticed that he seems to find this easier than some English grammar exercises.  The book contains many exercises that require the student to translate from Greek into English and English into Greek.

Now I’m considering how to approach the other languages to help him connect with them more and learn them easier.  Next school year he will be adding French to his studies.  From my brainstorming it appears as though I’ll be looking for resources that:

I’ve discovered that homeschooling an atypical learner is best done through observation and adaptation to find something that works for the child.   Sometimes I need to “stand on my head” to think outside the box and figure out a way to help my out-of-the-box thinker learn.  And then there are moments where my son gives me insight with a simple statement about his learning.  Thanks son for helping me out a bit!