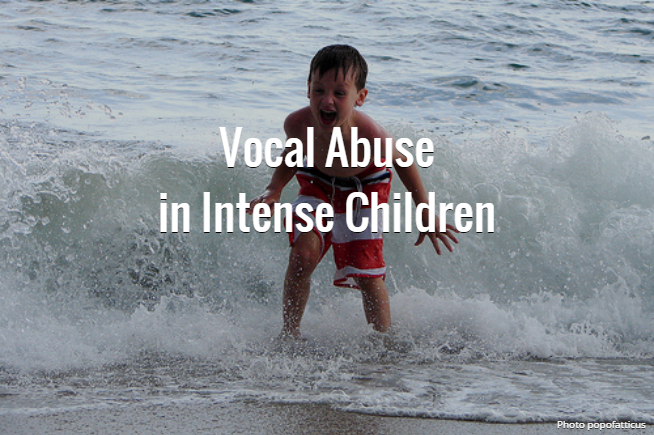 Children who have an intense personality are more prone to vocal abuse.   Voices may become hoarse or strained due to yelling, screaming, making funny voices, incessant talking or noise making.  One of my kids fell into that category and had a persistent hoarse voice.   As a trained Speech-Language Pathologist, I worked with several children who had similar issues so I was aware that this kind of hoarse voice doesn’t just go away on its own.

When I began working with my child, I first set out to figure out what kind of incentives would work.  My kid was going to have to do some pretty big behavioral changes and knowing that a reward was available made it doable for my child.

First, I chose one behavior to eliminate.  For instance, I had my child focus on not yelling all day.  When successful, my child earned the reward.  Once my child had consistent success in one area, we focused on another behavior like making funny voices.   This might not be an issue for some kids, but my kid loved to talk in funny voices all the time and it wasn’t helping the vocal cords heal and rest.  I didn’t want to eliminate funny voices entirely though, so I allowed it one day per week while my child’s vocal cords were healing.

We also practiced periods of vocal rest where my child would spend hours during the day without making any sounds.  At first this was difficult, but it wasn’t long before my child could go the whole afternoon without making a peep.  This was a huge step in my child’s recovery.

I also showed my child how to do an easy onset voice which sounds like a very breathy voice.  This eased the work the vocal cords had to do while they were healing.  I had my child practice the easy onset voice and use it when communicating with others.

I looked around Youtube for an example of an easy onset voice.  This video shows what an easy onset voice is like.  Unlike this video, I taught my child to use this voice for every word instead of just the first word in the phrase or sentence.

It took us a couple months of focused work toward changing vocal habits.  As my child’s habits changed, the vocal cords healed and the persistently hoarse voice went away.   It has been a couple years now and sometimes my child needs reminders, but the hoarse voice has not come back.