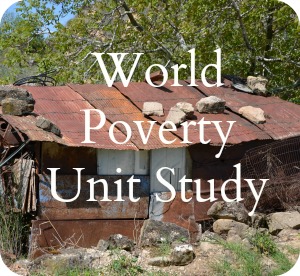 Four years ago I did a study on world poverty with my boys.  It covered topics like poverty, lack of education, hunger, war, and the contrast between our world and the developing world.  I included several YouTube videos and many of them had dramatic pictures of life in poverty.  I’m now revamping the study for my youngest child.  Since she is only six, I have avoided the topic of the sex trade and graphic portrayals of violence.

When I first did the study, I gathered the statistics from several different places.  While I do believe they are accurate, I may have some figures a little incorrect.  Some activity ideas were taken from Connect the Thoughts: Global Poverty and Hunger.

Here is the study in the order we plan to complete it.  I separated it into different categories to make it easier to read.