Home socialization You Homeschool? Oh, So You Don’t Have Any Friends!

You Homeschool? Oh, So You Don’t Have Any Friends! 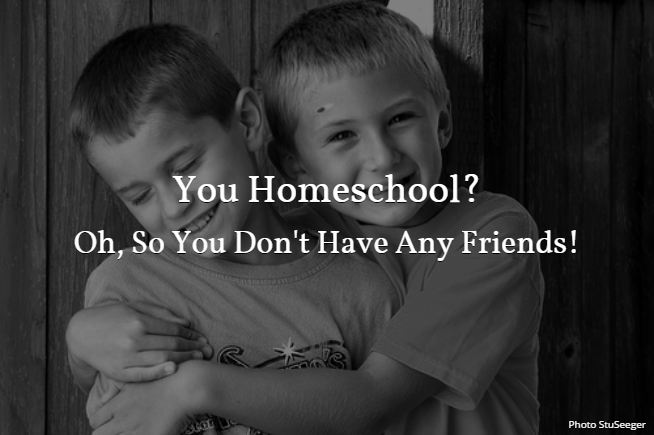 Recently I stopped to pick up my 10 year old son’s new glasses and the lady at reception started to ask my son tons of questions about school.  At first they were the general ones that he often gets about his grade or subjects that he likes.  Then she started asking more questions like how many more years he had in his current school.  My son didn’t understand that one.  Apparently, the move to a middle school happens at different grades around here depending on what elementary school you attend.  The woman was surprised that he didn’t know and started getting after him.

After a little berating, my son told her that he was homeschooled.  That immediately prompted her to say “Oh, so you don’t have any friends!” in a voice loud enough for the whole office to hear.  He quickly informed her that she was wrong and that he had friends.

I stayed out of this one.  My son was unphased and handling the situation just fine.  He was polite and effective at dealing her misstatements.  I actually found this situation quite humorous.   The irony of someone with poor social skills lecturing my child on social skills was just too much.  I couldn’t help laughing as this was going on.  Sadly, this will probably happen again when he meets someone else with poor social skills who thinks it is appropriate to remark about the need for socialization.