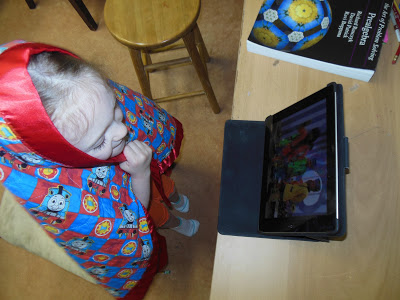 Arabic is one of the languages we are learning in our homeschool.  We have a long-term approach to languages and expect to study them in greater complexity with each year of schooling.

Because my daughter has been around her homeschooling brothers since infancy, she has been exposed to Arabic through videos and even grew up enjoying the Arabic alphabet as a lullaby.  Last year in Junior Kindergarten we started a few lessons on the Arabic alphabet.  Today she added a make-shift hijab to match the little girls on the Arabic Alphabet video (shown below).
She likes this one too.
In addition to learning the alphabet, she is learning basic vocabulary using the Arabic Lesson iPad app.  She typically does this on her own.  She also watches Arabian Sinbad DVDs

with her brothers and every once in a while she will play the Arabian Sinbad computer game.  My kids typically watch one Sinbad episode during breakfast, but for one week each month I will have them watch French DVDs instead.

Our progress is slow,  but with a long-term approach we have many more years ahead of us to improve our Arabic skills.  My oldest child is in 6th grade now and has learned to read and write Arabic and is ready to move into studying Arabic in greater depth.  He started on Arabic for Life

this year.  The first portion of the textbook is all review, but he is about to head into new territory.  He had no exposure to Arabic prior to first grade and started a gentle study of the alphabet at age 6. My middle child started Arabic at age 4 along with his brother.  He is currently working through Alif Baa

and should be finished with it by the end of 5th grade, if not before.

Arabic is not a language that I know.  My oldest child’s skills are beyond my own.  However, I am able to help guide his studies, correct his work, and listen for correct pronunciation.  My skills are developing as I learn along with my kids.  It is a rewarding journey.  I don’t know where we will end up with our skills, but we will have a working knowledge of the language and an ability to understand and communicate with a culture that is much different from our own.