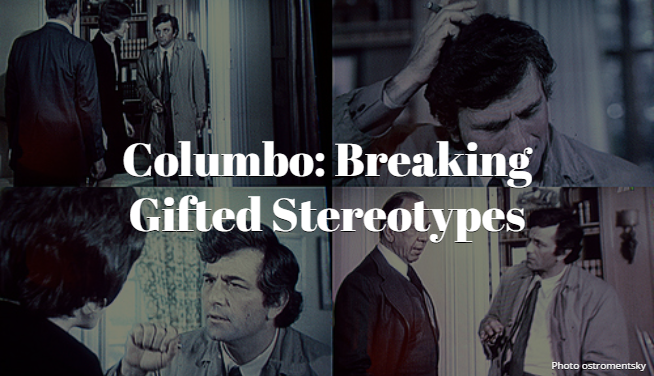 Columbo has been keeping me company lately.  While I am preparing supper and cleaning up the day’s dishes, Columbo is solving mysteries in the background.  If you have never seen Columbo, it deserves a look.  The series aired from 1968-1978 starring Peter Falk.  Columbo is a homicide detective that investigates suspicious deaths among the rich and famous in the Los Angeles area.  Unlike many recent detective shows that rely on forensic evidence, Columbo usually solves cases through logic.

Gifted individuals often see the world with different eyes.  They may see the same things that everyone else sees, but come to different conclusions about it.  In the show, Columbo repeatedly saw details that others missed.  These details would usually lead to him solving the case even when it was obvious to everyone else that it was an accidental death.

Some gifted individuals can become so lost in thought that they absentmindedly do something that makes them look ridiculous.  In one episode Columbo was lost in thought in an immaculate home.  As he was deep in thought, his cigar dropped ashes onto a pristine floor.  In another show, he bumped into things causing a TV production to stop.  He often gives the appearance of a buffoon who doesn’t know what he is doing.   This absentmindedness is far from absentminded.  In fact, gifted individuals who appear absentminded are usually deep in thought and may have several different lines of thought going on at once.

Another feature I love about the non-stereotypical treatment of giftedness in Columbo is his social competence.  He quickly makes the suspects comfortable and uses his bumbly, stumbly persona to gain more information.  Every once in a while you will see him depart from his persona to show that much of it is an act in order to solve the case.

Giftedness is so often stereotyped in reel life.  It was refreshing to watch Columbo and see giftedness played out in a way that often goes unrecognized.  Have you seen any of the Columbo series?  I’d love to hear your thoughts in the comment section.

Many different bloggers have come together to talk about giftedness in reel life.  Stop by Gifted Homeschoolers Forum to read more.