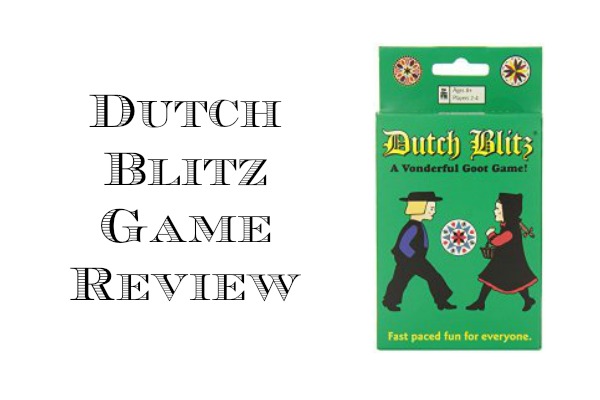 Despite its simple appearance this fast paced card game is loads of fun. Dutch Blitz is for age eight and up, but can be adapted for younger players. My boys are five and seven and both are able to play this game. This game isn’t just fun. It gives your child practice with number sequences, visual memory, counting, and it helps them learn how to focus when several fast things are going on at once.

Here you will see an example of the cards. Pretty simple, eh? Each person has their own deck of cards with cards numbered 1-10 in green, red, yellow, and blue.

Each deck has a picture on the back of each card. This is important in scoring in the game. Each player choses a deck and the cards are shuffled. Once they are shuffled each player lays out 3 cards next to a pile of 10 cards. The object of the game is not only to get the most cards in play, but to eliminate the pile of 10 cards as soon as possible. All players play at the same time which creates fast paced fun!

To put cards in play you can place a card from your pile of 10 or your row of 3 cards into it’s place in the middle of the table. First a 1 needs to be placed in the center of the table before a 2 can be played. You can only place a green 2 on a green 1, a blue 3 on a blue 2, a yellow 5 on a yellow 4, etc. The remaining cards in your deck can be played too. I have my boys go through them one at a time to make it a little easier, but you should go through them three at a time. 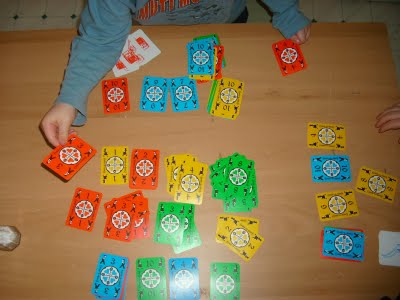 Here you see the layout for three people playing. You can see a row of 3 cards, a pile of cards and the additional cards in the deck. In the center of the table are the cards in play. Once a ten is placed on a pile it can be moved to one side to help make things a little easier. This game can be quite fast paced. My boys aren’t up to the fast pace of this game yet. When I showed them an example of how fast you can go through the cards they screamed for mercy! So I often go slow. The round is over when someone yells Blitz after playing the last of the cards in the pile of 10 cards. The cards are then gathered into a large pile and each deck’s cards are counted and the total number is recorded. If you have any left in your pile of ten you loose points. Then you start another hand until someone reaches a predetermined number of points.

I played Dutch Blitz as a kid and really enjoyed it. I am happy to be able to pass on the fun to my children. It may take a little while for them to get into the fast pace of the game. Perhaps in a few years I will be the one screaming for mercy!