Memorization Strategies with a Visual-Spatial Learner

Visual-spatial learners do not typically have very good memorization skills.  They tend to learn better by seeing and understanding relationships than memorizing.  I found that quite true in my educational experience.  Memorization took me lots more time than the average bear and it wasn’t until college that I began to discover a method that worked for me.  When I looked at information that needed to be learned, I would associate the material with something already in my head.  These associations made learning so much easier!

My 4th grader is a visual-spatial learner.  The other day he sat down to memorize some case endings and articles for his ancient Greek grammar.  One day he drew the chart that had to be learned and used many different colors and some artistic designs.  He probably spent about 30 minutes doing that, but he didn’t really retain anything.  Another time he looked at it attempting to memorize it, but it wasn’t working either.  Yesterday, I sat down with him and helped him associate the different cases with something he already knows and he learned them in a few minutes.  I went over them with him today and he still remembered them.    I can see that association is going to be a great tool for him in the future.

Here is the chart that he had to learn.  He had to learn the different case names as well as the masculine and neuter articles and endings for nouns and adjectives.  When I sat down with him, I helped him associate the case names with their meanings.  He has yet to master the articles and endings.  On the chart, I listed the case name (i.e. Nominative), the meaning (i.e. “to be” verb), and then listed the article and endings for the masculine (M) and neuter (N) nouns and adjectives (i.e. o os, to ov). 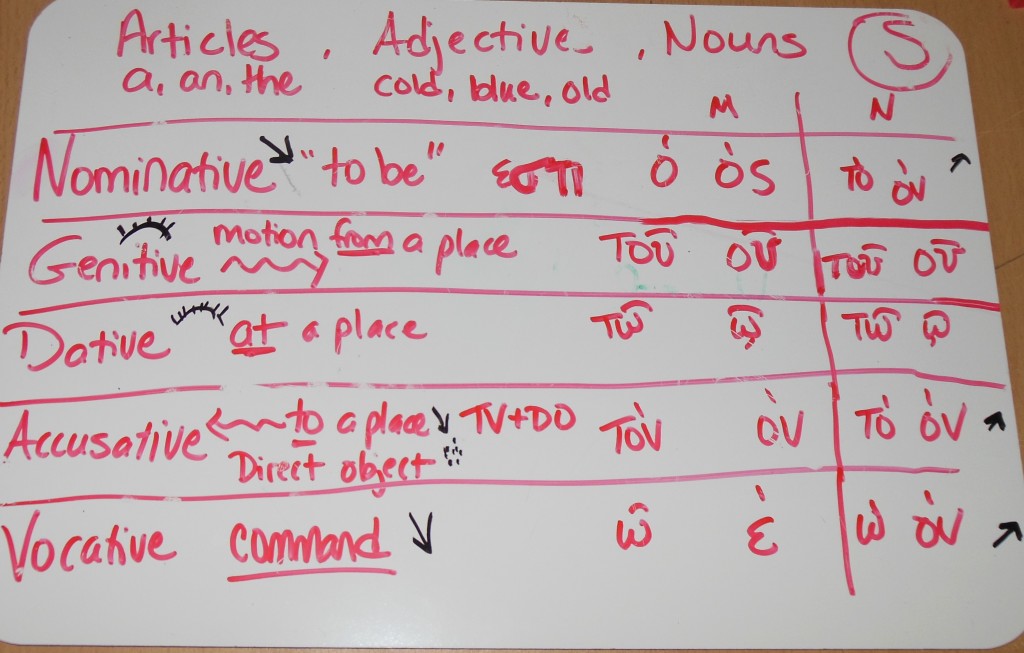 Here are examples of how associations worked to help him remember:

Nominative has a “to be” verb so we imagined 2 bees eating something and going “nom, nom, nom.”  He used to play a game where the eating sound was “nom” so that association made sense with him.

Genitive means motion from a place.  So we imagined someone we know named Jenny sledding down a hill.  We went a little further with this one to include the endings to give my son an example of how he could use associations for the endings.  When Jenny made it to the bottom of the hill she hurt her “toe” on a man and said “ou!” (masculine form).  She also hurt her toe on a stick (neuter) and said “ou”.

Dative means at a place so we imagined a person eating dates at a table.

Accusative refers to motion to a place.  We associated this one by pretending that someone had been accused of going to the kitchen to get cookies from the cookie jar.  We imagined that a boy got a “ton” of crumbs “on” the counter to remember the article and endings for the masculine form.

Vocative – command (He knew this one so we didn’t need an association for the meaning).

Accents are also part of the mix and to help him learn how the accents change in the different cases, I drew little half sunshines near the Genitive and Dative cases and then we added the sun to our story line.  For instance, Jenny only went sledding on sunny days and dates are grown in sunny places.  The sun represented the circumflex accent which is sun shaped.  The down arrows next to the cases represented the grave accent.  At the end of the row, I put up arrows because the grave accent turns to an acute accent at the end of the sentence.

All these little associations are so much easier for my son to remember than just trying to learn the chart.  Because he is a visual-spatial learner, we don’t spend much time with memorization in our homeschool.  We focus more on learning the how and why, but there are times when memorization is needed.  During those times he isn’t just learning concepts, but he is learning a strategy that will be useful for him throughout his life.