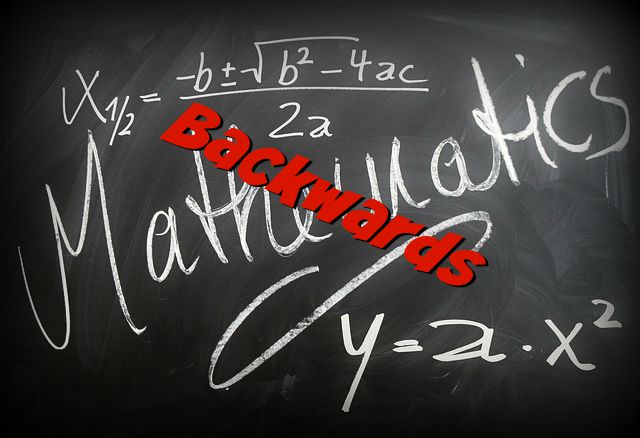 Several years ago I made an observation and decided to go in a different direction with math instruction.

Teaching math backwards seemed like a rather ludicrous thing to do. Math is by nature a sequential beast that requires order. Yet, I was starting to accept that not all children fit into that style of learning very well. I read a book that further opened my eyes to the topic. In the Mind’s Eye by Thomas West talked about this very issue.

But what should we do with students for whom the easy things are hard and the hard things are easy – those who naturally jump to the end and skip over the beginning, those who jump to the world of intuitive images without having mastered the basic elementary steps?

My children seemed to fit this pattern. It isn’t easy to try and figure out this whole backwards thing. It hasn’t just been math. Reading and phonics/spelling were backwards too. My son could read long chapter books with ease and not be able to identify short and long vowel sounds. Grammar and writing were backwards too. My son could quickly write a few decent paragraphs while not being able to define a noun. You get the idea.

What I have tried

Five years ago I attempted something different. I attempted to approach math at three different levels. I chose living math books on topics that were new to my children. I also chose DVDs on math topics that were above my children’s current math level. About once or twice a week I read aloud these books or my children watched the chosen DVDs. We also switched to Singapore Primary Math, a highly conceptual math curriculum with plenty of opportunity for problem solving and not a bunch of practice for each concept. At the same time I worked to solidify my children’s math facts. I didn’t let lack of knowledge of math facts keep my child from progressing in his standard math curriculum. Besides, Singapore Primary Math is very strong in teaching mental math skills which goes far in cementing math facts. 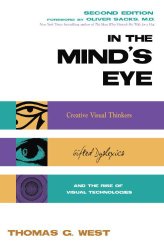 Towards the end of that school year I discovered something that opened my eyes to the idea a little more. My son was learning a new math concept. For fun I gave him a problem I knew he would not be able to do. I showed him how to do it and he was enthralled and highly motivated to move through his current curriculum so he could be able to do problems like that. This was not normal for this child. This child was never one to want to do any math.

That school year I went even farther even though I wasn’t sure if this little experiment would work. I used an algebra-based science curriculum for my science-loving child who was about to start Singapore 4. Crazy, right? It sure seemed like it, but then again it yielded positive results. My son was  understanding new math concepts and he seemed to be enjoying it. Because it was challenging he was more interested and he even called an algebra-based science assignment fun!

I thought that maybe this Thomas West was right. I began to think that maybe some children do learn best backwards and maybe a big step forward in math wasn’t really crazy thinking. In the book In the Mind’s Eye by Thomas West it says:

Perhaps, for these, one should consider teaching mathematics backwards, that is, teaching the images and patterns first and teaching the conventional symbol system, rules, and rigorous process later. This kind of fundamental change would surely be difficult, but may be worth the trouble, especially if it can be shown that some of those who could not do well with elementary mathematics may still do superlatively well with the most advanced forms.

So a year into this change I started to think that maybe I wasn’t crazy after all.   I thought that maybe it just may make sense for my kids. At that point the results hadn’t shown me otherwise. I had given my son the Stanford Achievement Test the previous year at the end of my first year trying to incorporate three levels of math. He aced the 3rd grade math portion of the test when he had only completed Singapore 2B.  As we continued on this journey, I watched and assessed whether this semi-backwards way of doing math was working.

It worked very well.  Now that my boys are working through algebra, we don’t have many different levels going on, but I still use videos from Numberphile and Vi Hart to expose them to math topics they haven’t encountered in their math yet.

We switched to Art of Problem Solving curriculum after Singapore 5 and it fits us well.  It has a discovery approach to teaching math concepts.  The curriculum presents the problems and the child is to work through them attempting to figure them out.  Then the child compares their worked out problem with how the book worked out the problem.  It is highly conceptual.  There are no pages of problems to apply a formula.  On the contrary, there are few problems and those problems are difficult.  Some can take an hour to solve.  But the process of solving the problem helps the child understand why the problem should be solved in that way.  It is a totally different way to do math and it works – at least for my kids.