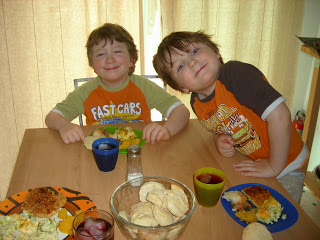 We finished our unit study on Scotland today to finish out the school year.

We have studied Scotland for about 6 weeks learning about the country and culture. Today we finished our unit study with a “feast.” We cooked Scottish food and then played some Scottish games wearing costumes we made. For our meal we chose recipes from rampantscotland.com and chose Shepherd’s Pie, Potato Cheese Cakes, Country Egg Casserole, turnip, Citrus cake, Viennese whirls, and crispy Mars bars.

Can’t forget Ribena (blackcurrant juice) to drink. They enjoyed trying new foods. One son loved the shepherd’s pie and the other liked the cheesy potato cakes. 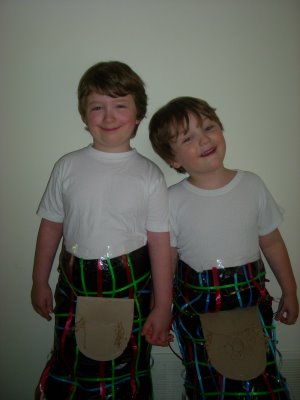 After our meal the boys dressed in their costumes. We didn’t have kilts or plaid fabric so we improvised with what we could find around the house. We took some black garbage bags and ribbons and made plaid patterns on the bags with the ribbons. The sporran was made from a cereal box and twine. I cut the cereal box to the shape of the sporran and the boys helped staple it together. We then undid some twine and made it into tassels that we stapled on. We had to staple the pocket shut because it kept coming open. My oldest son liked it so much he wore his sporran around most of the day he made it. The bagpipes were more difficult, but we found directions here http://www.instructables.com/id/How-to-Make-Bagpipes-out-of-a-Garbage-Bag-and-Reco/ It worked to some degree, but the boys had fun trying.

Once the costumes were on we went outside to toss the caber and throw the hammer. I found a long shipping tube for the caber. It was lightweight enough not to hurt anyone and tall enough to be caber-like. The boys had watched several videos on Youtube on how to toss a caber and they had practiced several times so they knew what to do. My oldest son won the caber toss. Then we did a hammer throw. 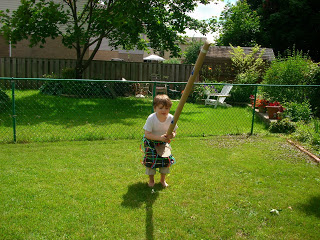 There was no way my boys were going to throw something that could hurt someone so I took one of my husband’s socks and put a tennis ball inside it.

This device was hammer-like enough for them. My youngest son did a great job throwing the hammer and he won that competition.

Besides reading books, watching videos, coloring pictures, playing Scottish games online, and listening and dancing to Scottish music we did a map project. Salt maps are fun, but my boys enjoy eating the map more so we made the map out of chocolate chip cookie dough. 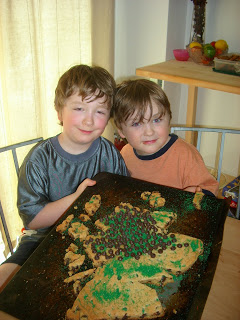 I made a large cookie cake and then cut it to it’s shape.The boys decorated the highlands and lowlands. They enjoyedchoosingwhat part of the country to eat. Now we have lots of leftovers to enjoy for several days as well as sweet memories of a little part of this world. Our next stop in our trip around the world will be the Ukraine.