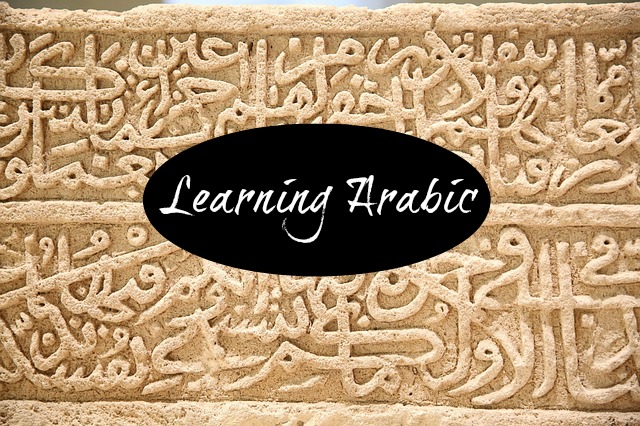 We are using the Alif Baa With Multimedia: Introduction to Arabic Letters and Sounds

curriculum this year for our study of Arabic. I searched for a while to find a Arabic curriculum for kids that was not Islamic and did not find one. So I went with a program for adults that I am adapting. 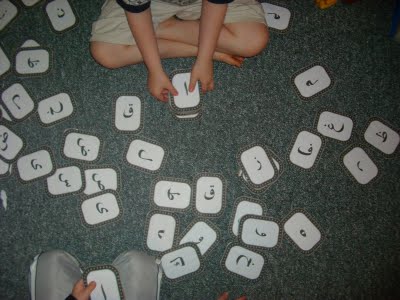 Right now we are all learning the sounds of Arabic letters. The Alif Baa With Multimedia: Introduction to Arabic Letters and Sounds

program comes with a DVD and on the DVD they produce all the sounds of the letters. Last school year my boys learned the Arabic alphabet song. This year they have progressed to learning the sounds the letters make. Because they have so many sounds not found in English the DVD is important to make sure we are producing and hearing the sounds correctly. 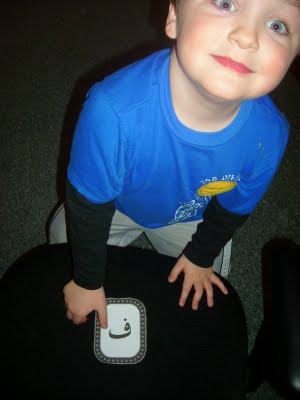 Today we played a relay game. The boys each had a set of Arabic letter cards. I had printed off Arabic letters last school year and glued them on cardboard to make them stronger. They both started on the other side of the room with their set of letters. I clicked on a letter on the DVD and a voice on the DVD produced the sound. The boys had to then search their letters to find the letter that made that sound and then run to me with the correct letter. You see a picture of my 5 year old showing me a letter on the right. He probably knows about 15% of the letter sounds right now. My 7 year old knows about 40% of the letter sounds. If they had the letter wrong they had to go back and try again until the correct letter was found. We probably spent about an hour doing this and having fun learning the sounds of Arabic. The boys had good exercise too!