Our history this year has involved quite a bit of reading and not so many projects. I wanted to have my kids do some kind of project while studying ancient Greece. I searched around for different ideas before I decided on a Trojan Horse Pinata. I thought my kids would love it. At first I decided to just buy a pinata, but then changed this rather simple activity into a big art project when I googled how to make a paper mache horse as we were finishing Black Ships Before Troy: The Story of ‘The Iliad’

. The paper mache horse didn’t look too difficult and we had all supplies on hand. I like to combine art with other topics when we get the chance.

To start we used 5 toilet paper rolls and 2 balloons to form each horse. We used tape to keep them in place. The kid who used more tape had less problems when we went to start the paper mache. 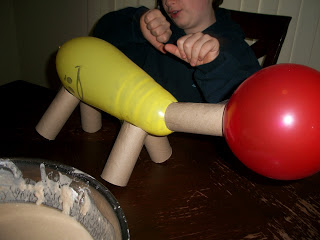 I made a paper mache mixture of one part flour and two parts water with a little cinnamon thrown in to make everything smell a little nicer. The paper mache activity was messy, but fun. We did the paper mache in two stages. After the first stage we let it dry for 3 days before we applied more paper mache. 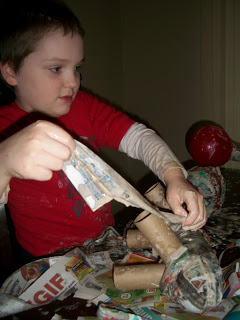 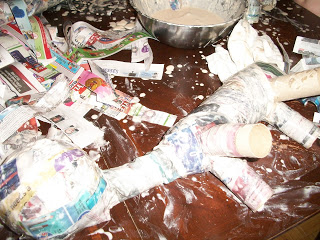 Once that dried it was time to paint.  We ended up making three paper mache Trojan horses since each child wanted to have one. 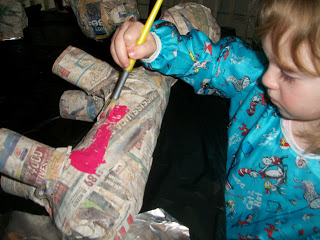 I popped the main balloon in the body and stuffed candy inside before I stuffed the legs with paper and taped them shut.  Here they are ready to be broken. 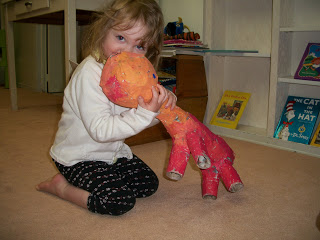 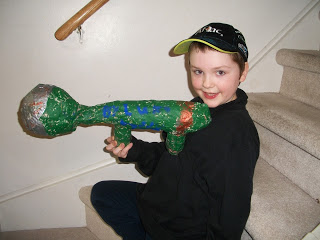 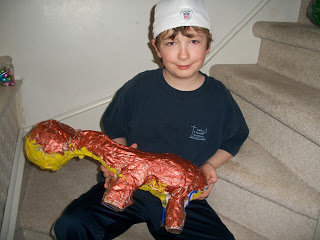 The weather right now is not suitable for breaking open a pinata so I attached them to a beam in the basement.  Each child took a turn hitting.  The preschooler took about 5 minutes to break off a leg, but the older two took a minute to get their candy out. 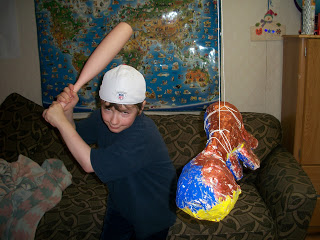 It was messy and fun.  It didn’t really teach a historical concept, but it allowed us to bring a little creative fun into our study of ancient Greece.  Next stop is finishing Aesop’s Fables and beginning the story of the Odyssey.