Sometimes my mind gets a little fuzzy when I think back to our first year homeschooling.  It was a very busy time in my life and the year was full of challenges.  I had done unschooling with my oldest throughout the preschool years and started Kindergarten when he was almost 5.5 years old.  For several reasons we only ended up doing formal schooling the first half of the school year and then went back to unschooling for the rest of the school year.

My schedule was a little crazy then because I worked full-time+ from home during that year.  I had devoted homeschool time from 11 am-3pm and then I worked from about 3pm-4am with a few breaks built-in.  I went with Sonlight as my main program that year because I wanted something all laid out for me.  I was also pregnant with my youngest child.  By the time we had gone halfway through the school year my son had pretty much met all the standard Kindergarten goals so I made the move back to unschooling for the rest of the school year.  With working full-time and the baby it made great sense for us.  It was also difficult for my 5 year old to sit down and do formal work when his playmate (3 years old at the time) was playing.  I’m a big fan of learning through play so taking a break from formal work worked for us. 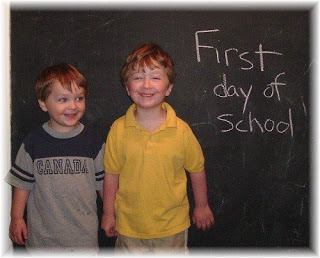 Here is what I used my very first year:

History, Language Arts, Reading:  Sonlight   I used what is now called Core K.  It gives a child an overview of different times and places.  I used the Fun Tales readers before going into Sonlight’s 1st and 2nd grade readers.  By the time we had started the school year my son had already learned how to read basic words through unschooling so it didn’t take him long to go through Fun Tales

.  The Language Arts from Sonlight didn’t really fit my son very well so we just focused on phonics and spelling.

for phonics.  If I remember right we did Book 1-3 that year.

This was a simple workbook that I used to get started with spelling.

(we didn’t finish it that year, but did it over again the next year along with his younger brother), home-grown dinosaur study for my son who wanted to be a paleontologist at the time, weather experiment kit, and anatomy game.

Math:  Horizons and Miquon for math.  These were not successful for us at all unless you count a child hating math a success.  I switched to Critical Thinking’s Mathematical Reasoning: Level B (Gr 1)

for grades 1 and 2 before switching to Singapore in grade 3 (starting in 2A).

It was definitely a learning year for me.  It helped me figure out my style of teaching and my son’s style of learning.  I was so confused at my son’s learning patterns.  They were not what I was expecting so when he learned things at a different rate I pretty much realized that I didn’t know what I was doing.I ended up taking him down to my local university at the end of the school year and borrowed some of the tests I had practiced administering when I went to school there.  Apparently, it would cost at least $500 for a student-in-training to do educational testing.  Instead, my old department allowed me to access their testing materials one afternoon in their office.  My little guy sat through over 3 hours of testing for me that day.  Now, these weren’t your regular standardized tests that are given in schools.  I don’t find those to be particularly insightful when you look at the results.  I did a more comprehensive test that is often used in psycho-educational testing.  It gave me great insight into my child’s strengths, weaknesses, and learning style.  It was like a little light bulb went off and I discovered what to do the next school year.

Our most successful and enjoying times spent homeschooling that year were during the home-made unit study on dinosaurs.  So for our second year homeschooling there were many changes.  I focused more on unit studies and went with a math program that was more suitable for my son’s learning style.  I also sold my business that year and had more time to devote to making up my own unit studies.  My younger son also joined in with my older son in many of the unit study activities.How was your first year homeschooling?  Did you find it easy or difficult?