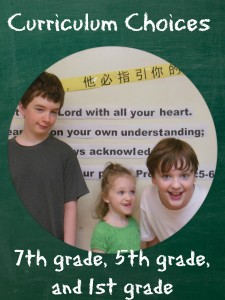 We have now embarked on our 8th year of homeschooling.   I take a wide and deep eclectic approach to education which works very well for my gifted learners.  Our homeschool is globally-focused so we spend a chunk of time learning about the world, different cultures, and study some of the major languages of the world.

My 7th grader is a diligent learner who enjoys the process of learning.  He is strong on the language arts front and has a high interest in science.  He currently has plans for a future in a STEM field.

Geography:  Africa (countries and culture) unit study, Material World, apps to learn the locations of all countries, capitals, US states and Canadian provinces (with their capitals), bodies of water, major rivers and landforms around the globe

Reading: Autobiography by Ben Franklin, Poor Richard, Julius Caesar by Shakespeare and Merchant of Venice by Shakespeare, short stories, Robinson Crusoe, Further Adventures of Robinson Crusoe, Around the World in 80 Days, Prince and the Pauper, Little Women, Last of the Mohicans, Call of the Wild, Great Expectations, Pilgrims Progress, The Man in the Iron Mask

Bible:  Read through Bible (1/2 way this year), Evidence for Christianity Study, The Holy Spirit and His Gifts, OT types and shadows study

– until 40 words a minute, Blender

Reading with an emphasis on visualization:  Trumpet of the Swan, Old Yeller, Phantom Tollbooth, Tuck Everlasting, Anne of Green Gables, The Lion, the Witch, and the Wardrobe, Cheaper by the Dozen, Wizard of Oz, I Am David

: Resources to learn how to read and pronounce French

Bible:  Evidence for Christianity Study, The Holy Spirit and His Gifts, OT types and shadows study

My 1st grader is a highly-creative learner who loves learning.  She will often take longer to accomplish a task because she takes creative detours that makes the task more interesting to her.  Right now, she loves science and has really enjoyed her recent history studies.  I’m excited to see where this year takes her.

Math:  Singapore 1B and 2A, Zome Advanced Math Creator 4 play

History:  Story of the World 1 audio with activity book with video additions (first 17 chapters only)