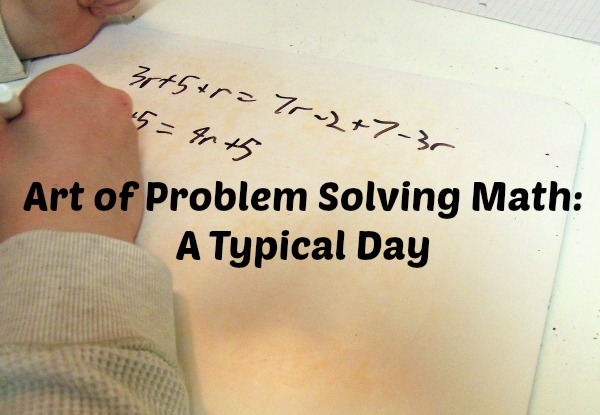 I chose Art of Problem Solving mainly because I wanted to give my children a solid math education that enabled them to thoroughly understand math concepts and explore math ideas.  My boys currently desire to go into a computer science field so mathematics may be very important for their future.  I also chose it for one child because the difficult problems enabled my son to face failure and learn to handle getting things wrong.  I chose it for my other child because it teaches through a discovery method which suits my visual-spatial learner very well. 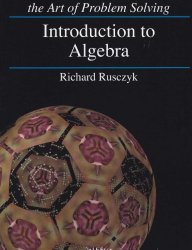 Today I’m sharing a typical day with Art of Problem Solving in our household.  My boys typically do their math at the same time and I bounce back and forth between them, as necessary.  When one child hits the end of the chapter review, I usually work the problems alongside my child while my other child does most of the work independently or does it later in the day with me.  Today, neither child was on the end of chapter review so I bounced back and forth between them.

My older son spends about 1.5 hours on math on a typical day.  My younger son spent close to an hour on Art of Problem Solving today and then he did some quick math fact practice.

My older son is on chapter 3 (Linear Equations) in Art of Problem Solving Introduction to Algebra.  I put a little sticky note where he left off last time so we know where he is to start.  I have him spend a certain amount of time and he goes as far as he is able to go in that time.  The first parts of the chapter tend to be on the easier side, so he goes through it a bit quicker. 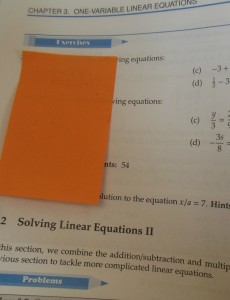 My younger son is on chapter 3 (Number Theory) in Art of Problem Solving Pre-Algebra.  He is starting today on problem 3.3.2.  He was stuck on this problem yesterday so we started with it today. 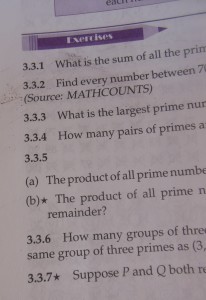 My older son understood what to do, so I hung around my younger son and helped him think through what the book was asking while getting other things set up for my 1st grader.

20 minutes in…My younger son was working on the second problem.  He needed help and guidance from time to time, but was mostly figuring out the problems on his own. 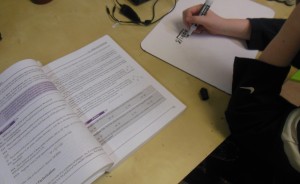 20 minutes in…My older son had two 4-part problems done.  He called me over to help with one problem so far. 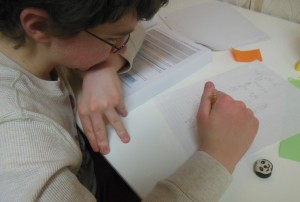 30 minutes in….My younger son needed help on a problem.  At first glance, I didn’t know how to do it so I sat down with him to try and figure it out with him.  Some of the writing on the board is mine and some is my son’s.  My older son just finished the 3.1 exercises and I checked his answers in the solution manual.  He missed a couple so I had him try them again. 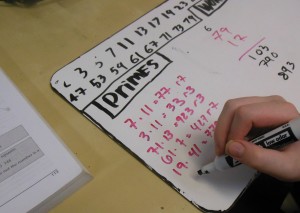 50 minutes in…After my younger son and I played around with numbers for awhile, we came up with what we thought was the right answer.  It was incorrect, but a glance at the solution manual showed me where we went wrong.  We then finished the next similar problem quickly.  My older son had gone to another room to work where it was quiet.

60 minutes in…My younger son finished Art of Problem Solving for the day as well as his math fact exercises and moved onto something else.  I called my older son to come back so I could check his work and help if he needed it. He had figured out the missed items and we started on 3.2 problems together.

I love the Art of Problem Solving books so I sat down and worked with my older son.  He often does the problems (teaching section) on his own.  They like it when I work the problems along-side of them and find it very exciting when they get it right and I don’t, lol.  Working the problems along side of them is one of my favorite parts in our school day. 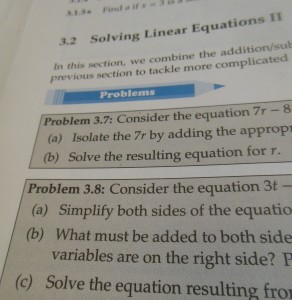 We each did the problems on our own white board.  If he was stuck, we talked through it. 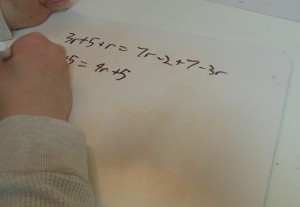 We continued through the rest of the problems until we finished the teaching section of 3.2.  It was about 1 hour and 45 minutes in total because my son had a couple breaks in there. 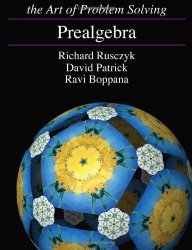 I’m quite pleased with Art of Problem Solving’s curriculum.  I haven’t found the need to do supplements.  We typically do most of the challenging problems.  It is pretty much impossible to figure out how to do the challenging problems unless there is conceptual understanding.  Sometimes we have needed to backtrack and go back over some concepts, but in most cases doing all of the problems have helped my kids learn the concepts well enough to move on.

It is time-consuming, thorough, difficult, challenging, hard, stimulating, grueling, exciting, and tough.  Get the picture?  My older son was not a fan of the curriculum or of math in general.  By the end of the Pre-Algebra book he not only began to like the curriculum, but for the first time in his life he started to enjoy math.  My younger son isn’t a fan yet, but I’m thinking he will be.  For now, he enjoys it when I sit down with him and we both work out the problems, so I do that when I can.  I highly recommend the curriculum.  I think it has been the best money spent since we began homeschooling 8 years ago! 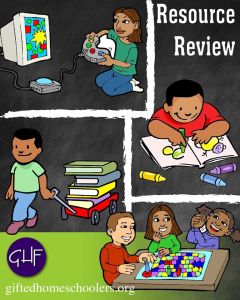 Check out Gifted Homeschoolers Forum to check out recommended sources and reviews.