Home eclectic homeschooling Education Should Be Aimed at Destroying Free Will.

Education Should Be Aimed at Destroying Free Will. 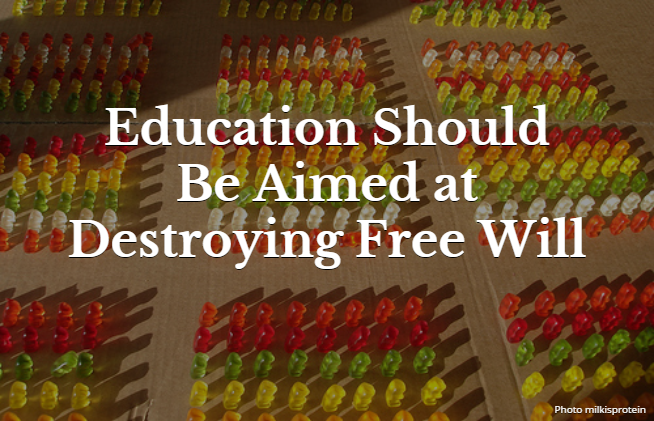 “Education should be aimed at destroying free will.”  At least that is what the forerunner of American education stated.   Education in the USA isn’t about the individual, but the whole.  Curriculum is designed and chosen by people who have never seen your child.   The US education system was not invented, but adopted from another country.

The United States is using the Prussian model of education.  In the 1800’s US educators became enamored with the Prussian model of education.  Prussia had established a free and compulsory education for all children.  Sounds good, right?  The reason behind the system is intriguing.  The professional Prussian army was defeated by Napoleon in 1806.  They believed the army was defeated because the soldiers were disorganized and not following instructions.  Following the defeat the German philosopher Fichte addressed the nation.  In his document he suggested that something must be done and children must be conditioned.  They could not be trusted to their parents.  He stated

If you want to influence [the student] at all, you must do more than merely talk to him; you must fashion him, and fashion him in such a way that he simply cannot will otherwise than what you wish him to will.”

Education should aim at destroying free will so that after pupils are thus schooled they will be incapable throughout the rest of their lives of thinking or acting otherwise than as their school masters would have wished. When the technique has been perfected, every government that has been in charge of education for more than one generation will be able to control its subjects securely without the need of armies or policemen.

The Prussian mind, which carried the day, held a clear idea of what centralized schooling should deliver: 1) Obedient soldiers to the army; 2) Obedient workers for mines, factories, and farms; 3) Well-subordinated civil servants, trained in their function; 4) Well-subordinated clerks for industry; 5) Citizens who thought alike on most issues; 6) National uniformity in thought, word, and deed.

The Prussian model did just that.  Germany became united.  The military and private industry flourished.  In the 1800’s US educators visited Germany and brought back reports of the wonderful education system in Prussia.  Horace Mann, the father of the common school movement, visited Prussia and brought back reports of the professional teachers, systematic curriculum, and obedient children even though he was there after school had closed for the summer.  The Prussian model began in Massachusetts in 1852 as a result of Mann’s lobbying.

So what does this mean for us today?  The Prussian model is still followed in the USA.  Children are socialized and indoctrinated in the ways of the government from an early age.  Instruction is systematic and children are restricted in what they learn and when they learn.  Whole ideas are broken into set subjects and fixed times during the day to give the child interruptions which breaks the self-motivation to learn.    How many of us can remember just starting to understand a math concept when the bell rang?  How many of us can remember having to stop reading in the middle of a chapter because it was time to move onto another subject?  Memorization is valued over thinking.  That is still seen on testing.  Students can memorize facts for tests and get good grades, but have no real understanding of the subject.  Understanding the how and why behind the first World War is given less importance than knowing names and dates in your typical high school classroom.

The Prussian model can be seen in the arguments against homeschooling.  The socialization argument isn’t just about people being afraid that children won’t know how to interact with others.  That argument is just plain silly.  Homeschooled children aren’t locked in a basement and hidden away.  Many homeschoolers interact with a greater variety of people than children in a classroom of the same 30 people all school year.  The socialization issue is about wanting the government to shape children.  Horace Mann the father of the modern school movement states that “the state is the father of children.”  If you spend any time in a public school, you will find that school goes far beyond instruction in reading, writing, and math.  Many with the socialization argument are afraid of perspectives that homeschooling parents may teach their children.  Uniformity in thought and mind is valued and encouraged while doing something different from the norm is discouraged.  Tolerance is taught for some things and not for others.  Independent thought is not encouraged.  The system of education trains children to think alike, act alike, and follow instructions.

The state is not the father of my children.  The government sees my child as a number in the system.  The public school sees my child as one of many in a classroom.  There is no substitute for personalized education with the child’s learning style, interests, and abilities in mind.   Dr. Brian Ray of the National Home Education Research Institute recently did a study on homeschooled adults.  He found that

“Homeschooling will tend to develop students with strong independent thinking and critical-mindedness.”