Green Eggs and Ham, For Real! 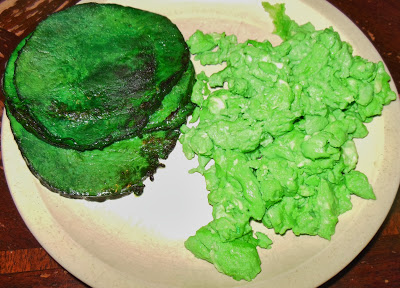 My daughter finished reading the book Green Eggs and Ham a couple weeks ago.  The entire book involves Sam trying to convince the Cat in the Hat to eat green eggs and ham.  The Cat was disgusted by the idea and finally decided to try it because Sam won’t leave him alone.  The book ends with the Cat in the Hat declaring that he likes green eggs and ham.

I thought it might be a little fun to serve my kids some green eggs and ham.  I had some food coloring handy and when I had the necessary ham and eggs, I went for it.  Getting the ham green was a little tricky, but the eggs were quite easy.  My daughter pulled up a stool to watch the green food on the stove while she started singing some made-up rhyming songs.