Our Experience with Math Acceleration 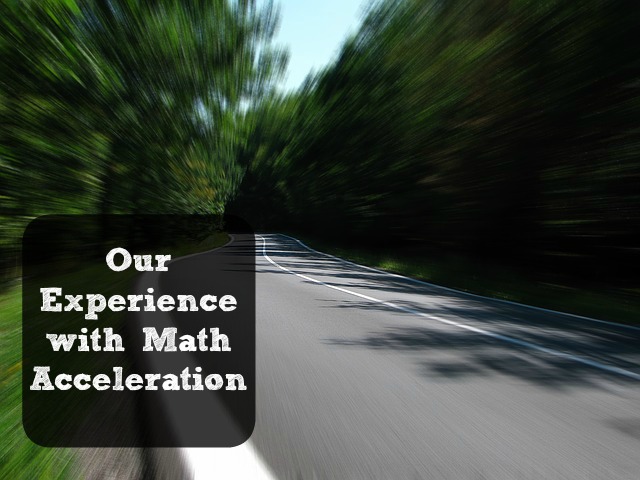 Last summer I made the decision to accelerate my boys in math.  I had had psycho-educational testing done late in the school year and discovered my younger son was not close to his potential when it came to math skills.  I also realized that I was going a little slow for my older son.  I was hesitant to compact and accelerate our Singapore math program for my youngest son since he would often make errors on his work.  After doing a bunch of reading and with a greater understanding of visual-spatial learners I decided to accelerate and compact Singapore Math

until my sons reached pre-algebra.

curriculum.  He is mostly doing this independently and not at an accelerated pace.  He had been going at the pace of 1.5 years of Singapore since we started it in 3rd grade.  Because Singapore is such a strong program he only tested into 2A when we switched.  At that pace he was on schedule to be done with 5B by the end of 5th grade.  With compacting and accelerating Singapore he was able to finish 3-4 months earlier.  I think he would have done fine either way.

To compact and accelerate we focused on doing the problems in the textbook, mental math (completed all problems in the teacher’s edition from 2A-4B), and Challenging Word Problems.  In short, we dropped the workbook and Intensive Practice books.  I sat side by side and we did many problems orally and skipped problems when he had mastered a concept and continued to practice ones that were difficult.

Compacting and accelerating Singapore has been an excellent move for my visual-spatial learner.  He has a math brain, but doesn’t really enjoy math.  Going through it quicker has helped his math skills immensely.  He mostly gets his math problems correct now.  I sit side by side checking each answer.  If he is firm in a concept we do less problems.  If he needs more practice then he gets more practice.  Sometimes we do problems orally and others require writing.  I think the move to accelerate and compact his math curriculum has made math more engaging and less boring.  He was bored and would often get problems incorrect because his mind wandered in the middle of a problem.  He is on pace finish Singapore 5B in the middle of next school year.  He just finished 4B last week.  I may end up slowing him down when we get to 5B because he is still working on mastering his multiplication facts.  I have continued to move ahead in math even when math facts weren’t memorized.  Visual-spatial learners tend to do better with the big picture and things like math facts are more difficult for them.

In short, math acceleration for my math-able child has been a great choice.  He is more confident and makes less errors.  For my older child who was working closer to his potential, math acceleration has given him a little extra time to spend in pre-algebra.