I started homeschooling my oldest son when he was in Kindergarten.  Let me just say that it was a frustrating year.  I have the philosophy of delaying formal instruction throughout the preschool years so my first attempt at something formal was after my son turned 5.  It didn’t go well.  My son had basically taught himself to read using toys and computer games prior to starting Kindergarten, but his reading was at a basic level.  I started doing some formal lessons with him and he took off.  I didn’t know anything about giftedness and this totally confused me.  I knew the importance of phonics, but his blast forward in reading was not accompanied by his phonics skills.  The poor kid.  I had him doing about 10 pages of phonics each day trying to catch up to his reading skills.  He never did catch up.  I couldn’t understand why my son could read chapter books with ease and have difficulty understanding the concept of silent e.  That year I had an introduction to asynchrony.

Asynchrony is something that is quite common in the gifted population.  It means that a child might have skills at very different levels especially during the younger years.  For instance, a 5 year old might be doing multiplication problems while learning how to read simple words.  Or, as in my son’s case, your child might be reading at a level far above the ability to spell or analyze the sound patterns in words.

Intensities are intense.  There have been moments when I have needed to just put my head down and laugh.  It is a crazy life.  There have also been moments where a child says something that leaves me in awe.  Whether there is an insatiable craving for learning, crying and covering ears when there is a loud sound, or times laying awake at night thinking about death, overexcitabilities can play a big role in how a child interacts with the world.  As a parent I have run into staring, judgment and well-intentioned advice.  It is at times like that that I have to just carry on and make the best choices for my kids.

One way I have helped my children is to normalize their intensities.  I’ve talked to them about how things like thinking deeply and feeling strongly are just part of who they are.  I talk to them about how it is okay for them to be who they were made to be, just as it is okay for someone else to be themselves.  At the same time, I help them learn to adapt to help them better cope with life.  For instance, the first time my boys went to a movie it quickly morphed to two boys in tears.  The next time we attempted a movie (several years later) we brought ear plugs and one child opted to keep the 3D glasses off until he was sure he could handle it.

Giftedness isn’t about doing work at an advanced level.  Many children who are gifted are high performers, but others are not.  Some are late bloomers too.  Many very bright and motivated children are at the top of the pack when it comes to academic achievement.  Gifted learners have a brain that functions differently.  It isn’t better or worse than a bright and motivated child.  It is just different. 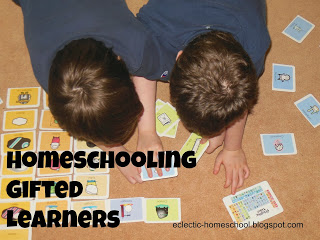 Since that first disastrous year homeschooling, I have learned much about giftedness and let go of expectations and have attempted to follow my children’s lead.  It is still a learning journey for me as we continue on this path, but there have been a few things that have worked well for us.

The driving force behind all we do is the passion for learning.  I seek to cultivate excitement, curiosity, a sense of wonder, and a desire to learn.  I view learning as an engaging dance of the mind that we are privileged to be able to spend our days doing.  As a result, we tend to have longer school days than most homeschool families of similar aged kids.  We spend time on electives and lots of time on areas of interest.  Engagement is key.  If my child is not engaged, then learning doesn’t happen.  For the early elementary years we are very much project-based and we spent a lot of time learning different topics in depth.  As my children grew, they spent more time with formal learning.

Keeping up the challenge is important with gifted learners, especially if you have a gifted visual-spatial learner.  Gifted visual-spatial learners are more engaged and perform better when the work is more difficult.  I was amazed when I saw this with my visual-spatial learner.  If the work is too easy, his mind wanders to the many more interesting things happening in his imagination.   Perfectionists, another common trait found in the gifted population, also need lots of challenge.  They need to learn to make mistakes.  Two of my children are perfectionists and I’ve sought to keep up the challenge while teaching them that is is okay to make mistakes and that no one is perfect.  Many teachable moments happen that give us a chance to stop and talk about how it is okay to make mistakes.

One of the greatest advantages for homeschooling a gifted learner is the ability to customize your child’s education.  Your child can work at his level whether that is all at one grade level or with different subjects at varying grade levels.  I enjoy personalizing my children’s education.  I quickly learned that all-in-one curriculum choices and packaged language arts curriculum were not going to work for my asynchronous kids.  I consider each child and each subject and look to teach at the correct level in each subject.  I can’t always reuse curriculum for a younger child because it may not be the best match.

This journey of homeschooling is rewarding.  Homeschooling gifted learners can be challenging, but challenge is a good thing, right? 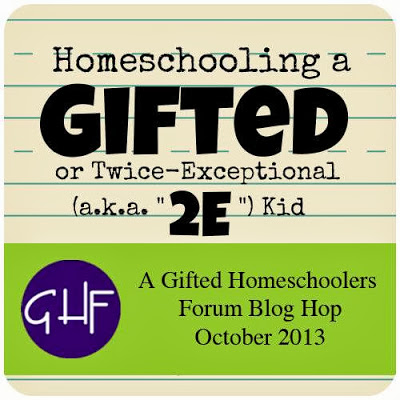 Check out more blogs on the Homeschooling a Gifted/2E Kid Blog Hop.